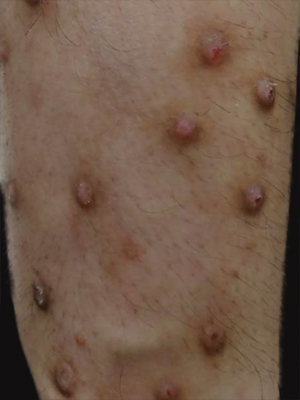 This is a skin disease that causes hard, itchy lumps (nodules) to form on the skin. Recently, its incidence is increasing very much. Some of the nodules start with insect bites in limbs, which gradually spread to the trunk, and in the worst case they can reach the whole body. Probably some viruses are involved in it. Prurigo Nodularis (PN) is a completely different skin disease from psoriasis, palmoplantar pustulosis, atopic dermatitis, and scabies. Everyone can get PN, regardless of age, gender, or race.
PN does not develop immediately after being bitten by an insect. In many cases, after three months to a half year later, very itchy lumps are gradually start forming from the limbs.
The patient may not know the reason and remain very confused. However, when asked in detail, they can explain of their trip to a mountain half a year ago, and there are reasons such as having been bitten by a black fly. If you suffer from PN, try to remember camping trip in mountains. Or bitten by mosquitoes in your back yard. Or even by a cat at home. There are, of course, cases where the cause is unknown at all. Some patients with serious atopic dermatitis can suffer from PN concomitantly without any bites. And PN patients sometimes have a history of other diseases such as lymphoma, HIV infection, and so on.

Usually the treatment is done with ultraviolet radiation therapy with narrow band UVB, or cryotherapy with liquid nitrogen, or local injection of steroids. However, the condition is troublesome when the symptoms do not go away with those applications. Among skin diseases, following mycosis fungoides and scabies, PN causes most serious itch. More itchy than atopic dermatitis. Therefore, patients often cannot do without even oral administration of steroid pills such as prednisolone. Just recently, I examined a patient with PN who well understood the side effects of steroid pill but couldn’t help taking the pill continuously. She had a moon face due to the side effect of the pill. She knew well it. But she cannot stop the pill.

But you should not give up the improvement. 80 – 90 % of itchy lumps will be eradicated in 3 to 4 months by our unique treatment. Without steroid pills or immunesuppressants or very expensive Dupilumab (Dupixent), you can be free from the serious itching, and can sleep well. You will not worry about the appearance of the nodules. Sure!!

Please put the ointment on the lesion and seal it with the special oil paper.
The ingredients of MAS (1) are : Difluprednate and Clobetasol Propionate, Macadamia Nut Oil, Vitamin B1, B2, B12, α-Lipoic Acid, Fermented Extract of Leaves of Shell Ginger (Alpina zerumbet), Very fine powder of 5 kinds of mineral ores.
Thanks to the infrared rays emitted from the fine powder of 5 stones in the ointment your skin is healed quickly. Other than our ointments you cannot find any ointments that emit infrared rays. Having treated more than 40,000 patients with various kinds of skin diseases, we created the formula of our ointments. It took us 15 years to complete them. Our ointments can cure many kinds of difficult skin problems due to psoriasis, PPP (pustulosis palmaris et plantaris), atopic dermatitis, nodular prurigo, etc. If our ointments cannot cure the lesion, it is due to fungus, or scabies, or serious malignancy such as mycosis fungoides (cutaneous T-cell lymphoma).

Oil Paper: We use traditional Japanese paper that is coated by flaxseed oil. The paper has good air permeability. If it is not available in your country,we can send it from Japan. Especially when you sleep, please cover the lesions by this paper after you put the ointment on the skin.

However, this method is only for symptomatic treatment. After a few months, itchy lumps may recur. For the true cure, you need to take Erythromycin and Cepharanthine along with probiotics and supplements.

Attention
If you are on one of the following medicines, please consult your doctor, and ask if Erythromycin can be taken together with the medicine.
Antiarrhythmic drug/Warfarin potassium/Theophylline/Aminophylline hydrate/Cyclosporine/Crolimus hydrate/Digoxin (Lanoxin)/Felodipine(Plendil,Renedil)/Valproate (VPA)/Midazolam/Carbamazepine(Tegretol)/Colchicine/Simvastatin/Atorvastatin(Lipitor)/Pitavastatin/Blonanserin/Ebastine/Edoxaban/Zafirlukast/Cimetidine(Tagamet)/Ritonavir/ any anti-cancer drugs.

Caution If you are on CCB (Calcium Channel Blocker) such as Amlodipine to lower your blood pressure, it is safer to refrain from taking Erythromycin, because the combination of Amlodipine and Erythromycin may cause unnecessary hypotension.
But Azithromycin which is also a macrolide antibiotic is safe with Amlodipine, and macrolide antibiotics are very important to treat PN. Therefore, if you are currently taking CCB, Azithromycin is recommended, though its efficacy is slightly less than that of Erythromycin.
The way you take Azithromycin is different from the way you take Erythrocin.
For 3 days take 2 tablets everyday. And the following 4 days, don’t take any tablets. And the next 3 days take 2 tablets everyday, and don’t take any tablets for the following 4 days. For example : If you begin 2 tablets on Sunday, then on Monday, Tuesday, you should take 2 tablets everyday. And on Wednesday, Thursday, Friday, Saturday, you should not take any tablets. — repeat this cycle at least for 12 weeks.

Patients often ask, “If for three months I have been taking Erythrocin that is antibiotic, are the side effects dangerous?”. The answer is “It’s generally not dangerous unless you have a serious illness”. Erythrocin is given continuously even for one year, for example, in cases like COPD (Chronic Obstructive Pulmonary Disease). Compared with the side effects of steroid pill/Dupixent/immunosuppressant such as MTX (Methotrexate), the side effects of erythromycin is really minimal. But, of course, when you feel something bad with Erythrocin (or Azithromycin), immediately stop it, and consult your doctor.

Cepharanthine ( Cepharanthin® 1 mg)
Cepharanthine is an alkaloid extracted from the plant “Stephania cepharantha Hayata”. Cepharanthin is a rather “obscure” medicine in Japan. It is used only for alopecia areata and leukopenia due to radiation therapy for cancers.
Because it is cheap, doctors are not so interested in prescribing it. (Doctors prefer expensive drugs for business!!). And Cepharanthin is going to be forgotten. But we find it effective for various kinds of diseases. Not only for PN but also, for example, psoriasis, atopic dermatitis, multiple sclerosis, ulcerative colitis, hypothyroidism, tuberculosis, etc., though we don’t know its precise mechanism. Nowadays only one Japanese company produces Cepharanthin. I do hope the company keeps producing it.

No contraindications have been observed with Cepharanthine.

I understand well that the patients prefer natural treatments such as herbs to steroidal ointments and antibiotics. But PN is a so itchy skin disease that it would be almost impossible to cure PN only by natural therapy without using steroidal ointment and medicines. I do not mean to say that it is absolutely impossible, but so serious itching (patients often say “Hell-like itching”) seriously destroys their quality of life.

Numerous probiotics are on the market, and it might be difficult for you to choose the best one. If not possible for you to choose, I recommend Bio-Three®.
http://www.bio-three.com/ . I don’t know if Bio-Three is the best or not for your case, because human gut flora is very different from person to person.
But it seems to be effective for most people because it contains three types of intestinal bacteria (lactic acid bacteria, butyric acid bacteria, amylolytic bacteria)and the combination of these bacteria provides optimal synergistic effects.
At this time, Bio-Three is not available outside of Japan. Therefore, we send it together with Erythromycin and Cepharanthine.
If you eat meat often, you need more probiotics.

* Also, try to eat one apple a day. Apple pectin is a good dietary fiber for conditioning the intestine.

4) Cost for the Treatment

5) How long do I have to use the oitments? Do these pills and supplements have to be taken forever?

Pills : You don’t need to take them forever!!
Erythromycin → Please take for 12 weeks (about 3 months) .
Cepharanthine →For 6 months. Preferably, for 12 months.
But if recurrence occurs, for example, after one year, you would be recommended to take them again for 3 months.

They are listed here in important order. Most of them are available in any coutries.

1) Biotin (15,000 mcg – 20,000 mcg/day)
For the skin, nail, and nerve, biotin is a very important vitamin. Large amount of biotin is recommended. Please read the explanation in my webpage ;
http://en.drmakise.com/ppp/

2) Copper (4 mg/day)
Copper can kill virus. Onset of PN is often triggered by insect bites that infects humans with virus. Copper is cheap supplement and you can get it at any vitamin shops or by the Internet. You should not take copper continuously for a long time. Take for 3 months, but the fourth month you stop it. Then from the fifth month take it for 3 months, and stop it for a month, and take 3 months, — like this cycle.
Although the exact cause of PN is unknown, it is thought that the virus must be involved in its onset and development. This sounds strange to many dermatlogists. But I know some cases that were much improved by Oseltamivir (Tamiflu) which is anti-viral medicine. However, although rare, Tamiflu has serious side effects for some patients, therefore, I don’t use it for PN.

3) Glutathione (500 mg – 1,000 mg/day)
Glutathione (GSH) is an important unique antioxidant. It is composed of 3 amino acids — glycine, glutamic acid, and cysteine that contains sulfur.
Due to sulfur GSH is nucleophilic and it attacks a toxic conjugated receptor. Therefore, it detoxifies many noxious substances.

4)Selenium (200 mcg/day)
This mineral is indispensable to glutathione peroxidase enzyme which is very important polymer antioxidant alongside SOD. Selenium is required to make this enzyme. Therefore, when selenium is deficient, naturally, defense against active oxygen and free radicals becomes insufficient.
Selenium also activates thyroid hormone. There are two kinds of thyroid hormones — triiodothyronine (T3) and tetraiodothyronine (T4). T3 is an active form and can be converted from T4 to T3. For the conversion three enzymes are involved. One of them, type I iodothyroninedeiodinase, contains selenocysteine. Selenium is essential for the enzyme to work well. Lack of active thyroid hormone T3 adversely affects PN.

5) Shell Ginger (JIPANG Ginger®)
This is an essential supplement to cure PN. The treatment of PN is completed with JIPANG Ginger®. Yes, you can be free from the agonizing itching forever. But please begin taking Shell Ginger (JIPANG Ginger®) about one year after starting treatment. In the case of PN, if you start taking it within a year, itching may come out due to the detoxification effect of Shell Ginger. Its effect is much stronger than glutathione (GSH) and selenium. For the detailed explanation : https://en.drmakise.com/shell-ginger-jipang/