Challenge Against Obesity Without Efforts 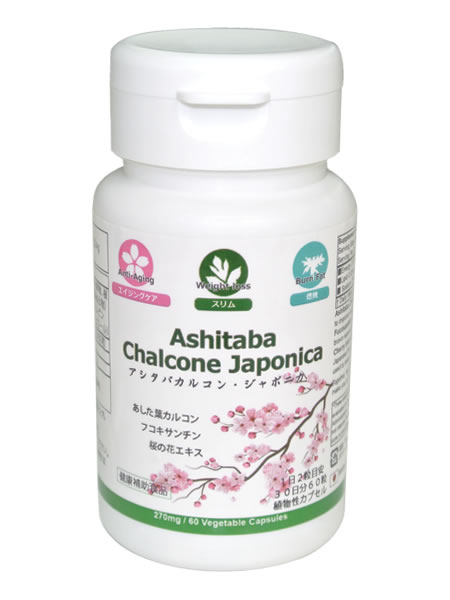 People of the world are getting more obese day-by-day. Obesity is a problem of not only developed countries like the U.S.A but also of many developing countries such as Malaysia, Thailand, Philippine, etc.
Regarding this present situation of obesity, it is a surprise that people of Japan are still staying slim to a healthy body weight. It is no exaggeration to say that the Japanese could be counted of having the fittest BMI (body mass index: weight / height2). If BMI is over 30, people are “obese”. 3.5% of the total japanese population comes under obese BMI. Among the 192 countries, Japan ranks 179th in obesity. The countries with lesser BMI (below 18.5) are also unfit, and denote starvation faced in many under developing countries such as Eritrea, Burundi.

The obesity rate of industrialized country G7 in 2014:

Japan BMI is exactly one tenth of the United States. This miraculously healthy BMI of Japanese people is mostly credited to the traditional Japanese foods of Japan. The best three natural substances from Japan that are very effective against obesity are Ashitaba Chalcone, Fucoxanthin and Extract of Cherry Blossom.

“Ashitaba Chalcone Japonica” puts all these three natural substances together into one vegetable capsule.

The plant named “Ashitaba” (Angelica keiskei in Latin) indigenous to the Izu island chain that is a group of volcanic islands stretching south and east from the Izu Peninsula, Japan. Now it belongs to Tokyo Prefecture, and there are flights between the islands and Tokyo. But until 150 years ago, the islands were very remote and two of them were used to place internal exiles. They were engaged in arduous compulsory labor. To support their never waning stamina they ate this plant daily, because the local people and the exiles knew of Ashitaba’s powerful tonic effects. 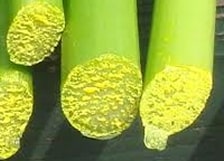 Traditionally they boiled this plant or added it to soup. And the powder of Ashitaba is mixed with buckwheat powder to make nutritious soba noodles. When the stalk of Ashitaba is cut, yellow sap exudes from the haulm.

This sap was effectively used in the external treatment of smallpox. This is described in an old botanical book, Yamato honzo, by Kaibara Ekiken ( doctor and botanist during the Edo period )

Nowadays modern scientists have verified that the sap contains very special flavonoids – Chalcones that are Xanthoangelol, and 4-Hydroxyderricin. These chalcones increase Adiponectin production in our bodies.

Adiponectin is a protein hormone that modulates glucose regulation and fatty acid oxidation. This hormone is exclusively secreted from adipose tissue into the blood stream. One of the amazing effects of Adiponectin is reduction of visceral fat.

CHALSAP-P8 is the trade name of Ashitaba Chalcone.

CHALSAP-P8 is the trade name of Ashitaba Chalcone.

The cell in the movie is Human Hepatoma Cell Line, HepG2.
Control : the cell is proliferating by cell division.
Xanthoangelol induces apoptosis of HepG2. It takes a few hours.
4-Hydroxyderricin destroys HepG2 rapidly by another mechanism within one hour.

Fucoxanthin ( Got sent from sea). 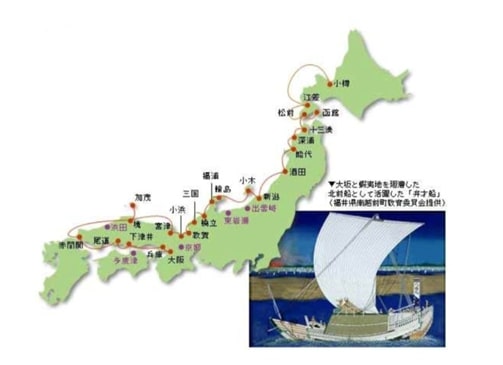 You know “Silk Road”, but have you ever heard of ” Kelp Road”? It appeared in Japanese history. During the Muromachi period running from 1336 to 1573, shipbuilding technology developed. And in the early Edo period (17th century), transporting kelp collected by people Ainu of Hokkaido to Osaka by ship along the western coast of the Sea of Japan became possible. “Kelp Road” means that sea lane. At each port of “Kelp Road”, the kelp food culture was born, creating a so-called “umami” which is the basis of Japanese cuisine. Today, kelp is cheap food, but in the times when the western shipping route was not well prepared, in some regions kelp was precious even as a substitute for tax.

Kelp influenced very much on Japanese cuisine and it supplied very important mineral, iodine, with Japanese, which contributed to the health of thyroid. But at that time nobody knew kelp contained “Fucoxanthin”.
Fucoxanthin is a xanthophyll, like astaxanthin. But fucoxanthin is different from astaxanthin in that fucoxanthin promotes fat burning within fat cells in white adipose tissue by increasing the expression of thermogenin. 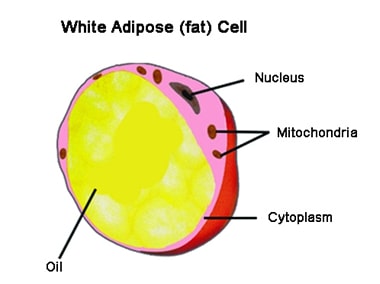 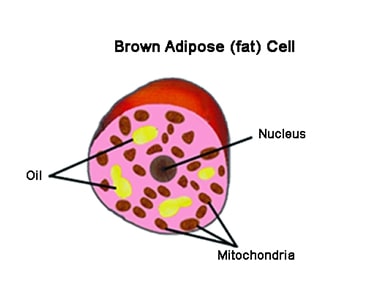 Brown adipose cell contains a lot of mitochondria and plays important role to produce energy. And it is necessary to keep normal body temperature. When some animals hibernate in cold winter, their brown adipose cells produce heat by burning fat without exercise.
Then, everybody thinks that there should be an excellent slimming method by increasing the number of brown adipose cells (BAC) such as “BAC Fat Burning Plan”. You are right, but not so realistic. There is neither magic pill to increase the number of BAC, nor handy electric stimulator. The only surest method is living in extremely cold climate. Siberia or Scandinavia is not enough. Much colder place, such as Greenland. Inuit people living in Arctic have more brown adipose cells than those people living in moderate temperature zone. You should stay in a family of Inuit for a few weeks to increase brown adipose cells. But as soon as you come back home, they decrease.

But Japanese researchers discovered a safe substance that let white adipose cells burn fat.（http://www.ncbi.nlm.nih.gov/pubmed/15896707)
Proteins called UCP1 (Mitochondrial uncoupling protein 1: uncoupling protein 1) are specifically expressed on the inner mitochondrial membrane of brown adipose cells. UCP1 is a key substance of heat production and it burns extra fat. However, since adults have few brown adipose cells, there are few UCP1. But when we take fucoxanthin, UCP1 is expressed in many white adipose cells, and fat is burned! That is to say, you can lose weight! This is a very important discovery, but strangely enough, it is not well known. At the present time, food ingredients expressing UCP1 in white adipose cells other than fucoxanthin have not been found.

Figure (1) shows the result of giving KKAy mice of spontaneously diabetic obesity model a food mixed with fucoxanthin for 4 weeks. Compared with the control, the visceral fat is significantly decreased. At the same time, the expression level of UCP1 was also observed to increase markedly. Figure (2) 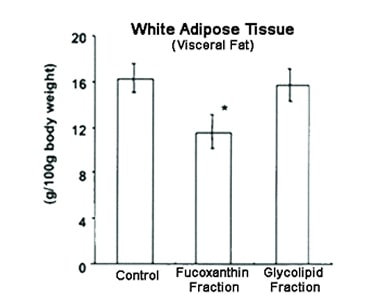 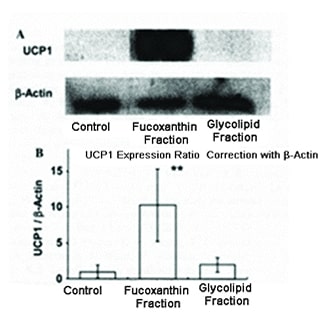 Extract of Cherry Blossom : Gift from the Goddess of Sakura 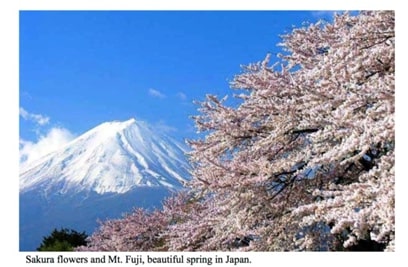 Ashitaba Chalcone and Fucoxanthin prevent “obesity” itself. But Extract of Cherry Blossom has no slimming effects. Nonetheless, the extract is very important to prevent pathological condition caused by being obese. It suppresses production of of “AGEs”.

Obesity doesn’t always mean Diabetes. Exactly speaking, “Obesity” is not equal to “Diabetes”. But, obesity is very close to Diabetes.

WFC (white fat cell) secrets cytokine called TNF – α that interferes with signaling from the insulin receptor in WFC to the protein GLUT4 (glucose transporter 4). Obese people have much more WFC than slim people. The more WFC, the more TNF – α is secreted, and the more interference takes place. Consequently, glucose in the blood will be less taken into the cell, and unnecessary sugar will be present in the blood. This is almost the same as the pathology of diabetes.
Then, what will happen? Among the excess sugar, there is sugar which is incompletely formed. When such sugar is exposed to body temperature, it binds to protein. This phenomenon is called “Glycation”.
The carbonyl group (C = O) of the sugar (glucose) reacts with the amino group (NH 2) of the protein to form a Schiff base (C = N), and after more complicated chemical reactions, the glycated modified protein “AGE” is formed. AGEs is an abbreviation for Advanced Glycation End Products. AGEs is a generic term for products by glycation reaction. It is not a compound showing a certain structure, and over 100 types of AGEs are currently known.
This glycated denatured protein does not perform a decent function as the original protein. AGEs inhibit the action of mitochondria, increase the oxidative stress there, and gradually destroy normal cells. AGEs are produced in large quantities not only at the stage of diabetes or pre-diabetes, but also when taking too much sweetness. In addition, it comes into the body not only from within the body but also from food. Lot of AGEs exist in the brown part burned of hotcake and barbecue. Probably 70% of the total population of this modern world suffer from AGEs.

Extract of Cherry Blossom contains inhibitors of noxious AGEs production. Two glycosides, “1-caffeoyl-O-β-D-glucopyranoside” and “quercetin 3-O-β-D- glucopyranoside”,are important. They suppress the production of AGEs in a dose-dependent manner.
The figure shows the result of adding extract of cherry blossom, caffeoyl glucose or quercetin glucoside, to a mixture of albumin and glucose. The mixture was incubated at 60℃ for 48 hours. 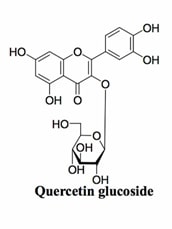 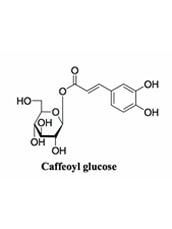 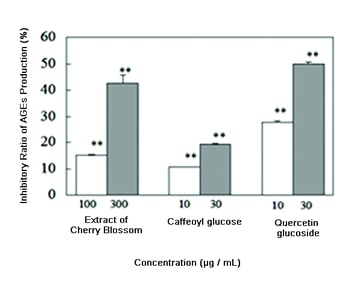 It is often said that arteriosclerosis is caused by cholesterol, but it is not really the most important cause. It is this “Glycation” that gives more serious effects than cholesterol. LDL called bad cholesterol does not act as much villain without AGEs.
About 30% of the proteins constituting the human body are collagen. Collagen also exists in the inner membrane of the artery, and it plays a role like a kind of cushion. When this is glycated, the elasticity of the blood vessel is lost, and it becomes thick and hard. It is “hardening”. “Glycation” is almost the same as “hardening”. This happens in the whole artery. We cannot see it. But our blood vessels become harder gradually over time. Only when heart infarction attacks us, we can notice it.

There is lot of collagen in the bone. If this is glycated, the bones will, of course, becomes brittle and osteoporosis occurs. Then calcium dissolves out of the destroyed bone, which calcifies the blood vessels and promotes arteriosclerosis more. In other words, glycation is a straight way toward arteriosclerosis.

70% of the skin is composed of collagen. Therefore, when this collagen is glycated, it has a serious effect on the skin. Collagenase and elastase in the skin act to decompose not only AGEs made of glycation of collagen but also collagen and elastin themselves, which leads to serious deterioration of the skin.

There is protein called crystalline in the lens of the eyes. Crystalline is not metabolized throughout our lives. When this is glycated by excess sugar and oxidized by ultraviolet rays, the lens becomes opaque and cataract occurs.

What happens when glycation occurs in the brain? The brain is a huge mass of fat and protein. When the protein is glycated, it can also be converted into altered fibrous protein of β-amyloid. This is a spot called senile plaque. This will kill nerve cells, and is one of the causes of Alzheimer’s disease.

Also, AGEs are deeply involved in cancer. Patients with diabetes have a 3 times higher incidence of cancer than those who are not diabetic. It is said that every day 10.000 cancer cells are born in the human body. But thanks to the immune system these cancer cells are killed sequentially. However, when glucose is excessive and AGEs are also generated in large amounts, AGEs interferes with DNA repair, and more cancer cells are generated than usual.

F urthermore, when AGEs bind to AGE receptors that are present on the surface of cancer cells, metastasis of cancer cells is likely to occur.
One of the extremely bad AGEs such as “Acrylamide” is contained in potato chips in a large amount. It increases the incidence of endometrial cancer, ovarian cancer, breast cancer, etc.

As described above, “Glycation” erodes blood vessels, bones, skin, eyes, brain, and drives people to the most fearful situation such as dementia and cancer. “Humans getting obese are humans getting glycated”.